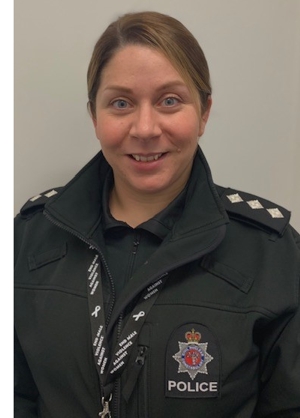 Q. What's your role in the CNC?

A. I'm based at one of the CNC's largest units working in strategy and operational readiness. I've been with the CNC for 16 years. I started in Dounreay as a staff member before becoming a Police Officer, then decided to become a firearms instructor so I moved to Cumbria, becoming an Inspector in 2017. In 2019 I went on maternity leave and had twin boys. When I came back I decided to throw myself in at the deep end and go for promotion! I got appointed as Chief Inspector in January 2021.

Q. You're the chair of the Gender Affinity Inclusion Network (GAIN); what are its aims?

A. Since becoming a mother, I've become even more aware of the difficulties and challenges women can face in the workplace in terms of flexibility, access to roles and equal opportunities. GAIN has a lot of different strands, including the Menopause Action Group (MAG), the New Parents Working Group, the HeForShe campaign, and more recently work to raise awareness of endometriosis. We also look at issues like female body armour and uniform. The network is well represented by both men and women as well as our CNP Federation, I would like to thank them all for their ongoing support in promoting an inclusive culture within the organisation.

Q. What's been your most recent work with GAIN?

A. With the recent events in policing, I was asked to develop a Violence Against Women and Girls Advisory Group, initially just reaching out to women to give them a safe space to communicate. Asking them do they feel the organisation is a good place for women and is there misogyny, sexism or inappropriate behaviour in the organisation? This key focus is supporting the ongoing CNC Culture Review.

Q. Would you like to see more women working in the CNC?

A. Massively so. I had a difficult experience myself breaking through the glass ceiling. I was one of a few female Sergeants at the unit where I did my operational firearms commander course. I later did my firearms instructors course externally where all the pictures on the wall were of men. If you break the glass ceiling other women look at you and think, 'If she can do it, so can I' which is great! The challenge is ensuring women have equal access to more male-dominated roles especially when they have responsibilities at home and it's difficult for them to spend time away completing courses.

Q. What can be done to attract women to these roles?

A. It's about breaking down the barriers - first of all attracting women's interest and then making it accessible, by maybe offering multiple, shorter courses or doing them online, as opposed to them having to leave home for weeks at a time. Culture is also a huge part of it - women can sometimes suffer from imposter syndrome, a lack of confidence, and many other factors that affect them without the additional pressures of a non-supportive Culture. Encouragement and support is key.

Q. How has the CNC changed for women?

A. Well there is no longer the requirement to wear skirts and carry a handbag which is a bonus! In years gone by, there weren't many senior female officers in the organisation who had children - it wasn't easy to have a Career and be Mum but now we want to say, this is possible, the force supports you. Being diverse as an organisation is an advantage and we should work smarter for the privilege.

Q. Why is the CNC a good place to work?

A. People are at the heart of what we do and the CNC is full of good, hardworking people who always want to do their best. There are opportunities for everyone and I look forward to the future of the organisation.