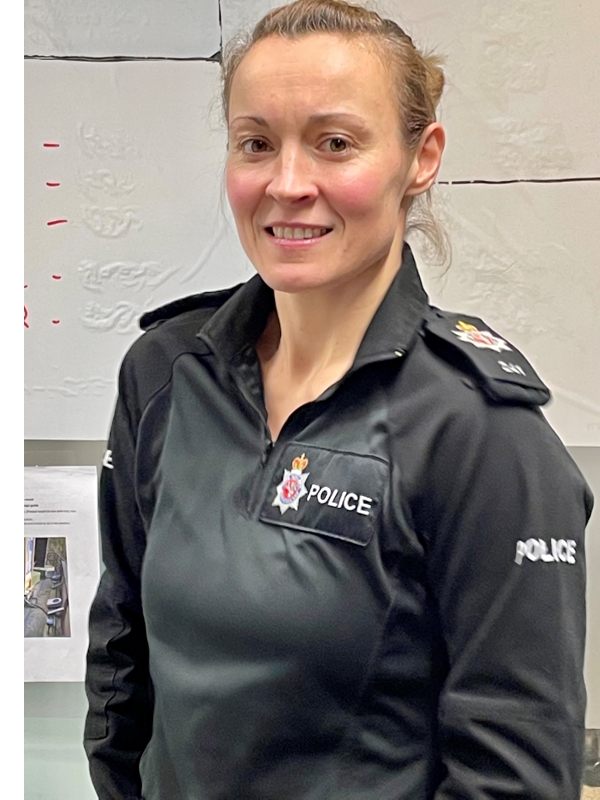 Q: Helen, what's your role in the Civil Nuclear Constabulary?
A: I'm a firearms instructor working in the compliance department. I've been in the CNC for 20 years. When I joined, all I wanted to do was to be a dog handler. I had two dogs and when my last dog retired I had the choice of taking another dog, for another five or six years. However, at this point I was 30 and my partner and I wanted to have children. If I took another dog I would have to hand it back if I fall pregnant, and I couldn't handle doing that.

Q: That's not something men would have to consider, is it?
A: No, a man wouldn't have to make that decision; they'd take the dog and it wouldn't matter. I would have loved to have had another dog, but it just wasn't the time. So when a job came up doing PST, fitness training and self-defence, I moved to that role. It was a day job that worked well with family, and from that we migrated into the firearms department and I went on my firearms course. I'd been working in the department for a wee while and all my colleagues said, "You have to come and be a firearms instructor".

Q: It sounds like a very varied career.
A: Yes, a lot of jobs aren't a career, but the CNC is, for as long as you can keep fit and healthy. It's never boring. I've never thought about leaving. It's part of me, it's what I do.

Q: There's a myth that working in the CNC can be more mundane than Home Office policing?
A: If you want a role where you're doing a very important job but maybe not being mentally challenged on a daily basis, that's fine, you can do that. I couldn't. I need to be challenged. Dog handling, medic training, fitness training is all so rewarding. I'm sure going to the Home Office you can get exactly the same excitement, but there's an awful lot more paperwork as well. We get a lot of job satisfaction, and we generally never see the bad side. The Strategic Escort Group (SEG) is great too. It's not a family role, you're away for a month at a time, but the training that the guys get on SEG is just crazy. Why would a young person not want to do that?

Q: What's the best thing about being a CNC officer?
A: We're family. The guys I work with, we're a team. We've all got each other's backs. They're my best friends as well as my work colleagues. We go away on courses, have work trips away and everyone gets on. The only downside as a female is that you have to be away from your family and that's really hard. There are one or two men who are the main child carers, but not many compared to the women.

Q: Would you like to see more women joining the CNC?
A: I'd love to have more females in the role. A lot of people are like, "I couldn't do that". Yes, you could. Everybody can do it. It's just confidence. When you go through the training, you gain so much confidence in your own abilities. When you see people who've been through three or four months of training, they're like different people. I would love to see more women being more confident in themselves. This isn't just a job for the boys.

Q: You are a member of the Civil Nuclear Police Federation. What more can they do to assist in offering women more opportunities?
A: I was recently invited to the CNPF conference where the subject of equality was top of their agenda. I look forward to working with them further to ensure that inclusion for all remains at the top of their agenda. I am confident that anyone who approaches the CNPF with inclusion issues will have their voice heard.