Chief of Staff: Important to retain our hard-working CNC officers 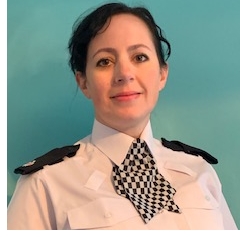 The new Chief of Staff for the Chief Constable of the Civil Nuclear Police (CNC) says one of the most important tasks in her role will be retaining hard-working officers, by providing job satisfaction.

Supt Sheree Owen has recently returned to the CNC after working on a national role with HMIC. She has come back as a Chief of Staff for Simon Chesterman, the Chief Constable.

"I've got quite a wide remit which includes recruitment and retention - how we can keep officers, provide job enrichment and care about the people who work for us," Sheree said.

"I also bring a bit more scrutiny and challenge to the organisation from my experience at HMIC."

"Our role varies between normal policing to dealing with incidents that would have global implications.

"We have to keep our officers absolutely committed and ready to move at a moment's notice. But the day job is actually just very steady. So, it's a really difficult role."

The CNC is and has been called upon as part of 'Operation Temperer' - assisting Home Office forces, along with the military, during terrorist attacks.

"Our officers do a lot of training - which is to a very high standard. They are, effectively, AFO CT officers carrying out high-end tactics. And they're doing that on a nuclear site with all the challenges that brings."

So how does the organisation retain talented colleagues?

"We retain people by giving them training, which we do on site. We need to have people who specialise and keep training to keep them interested in what they're doing."

Sheree adds that to keep officers motivated they'll be getting out to other forces, to offer their specialist services.

"We're going to carry out some Home Office policing while keeping the security of the CNC. It's a really good job, one that you can stay in forever."

She adds that training is excellent and offers really good prospects.

"Because we're a small force we get really good kit. We look after our people and that will only get better the more we get into the national arena for doing more jobs."

The CNC has agreements to provide additional capacity to its Home Office colleagues.

An example she gives is when forces went to critical after recent terrorist attacks when CNC officers went into town centres across the country to provide reassurance patrols.

The CNC Federation's biggest concern right now is recruitment and retention, particularly the retention of experienced officers. Home Office forces are recruiting, including firearms officers. Does Sheree think this could have an effect on the recruitment drive for the CNC?

"I've been a firearms officer then Commander for almost 20 years in the CNC and I've seen what it's like out there in normal policing through my role at HMIC.

"The grass is not greener. We have got a great job here which is why I'm coming back to carry on with that," she said.

Sheree has worked with the CNC Federation for a number of years: "The Federation provides a vital link," she says.

"Officers who work on the frontline, who are doing their job day to day, know that they've got a link directly to the Chief Constable, to me and my team through the Federation.

"It provides our welfare support and helps to set us up on the stage nationally, which is excellent considering we're a small force."

She particularly mentions the terms and conditions achieved by the Federation for the CNC - including pay parity with Home Office colleagues.

"We'd never have got that if we didn't have the Police Federation," she adds.

. "Although Home Office Policing involves a wider range of jobs, we do something that's really important for everybody," she says.

"Home forces couldn't provide the nuclear protection role. It needs to be done and we do it really, really well. We're better than anybody else in the world at what we do.

"It's so committed. We're all absolutely focused on the same thing. Every single person you speak to on the frontline in the CNC knows exactly what we've got to do.

"I care about the CNC and am delighted to be back."